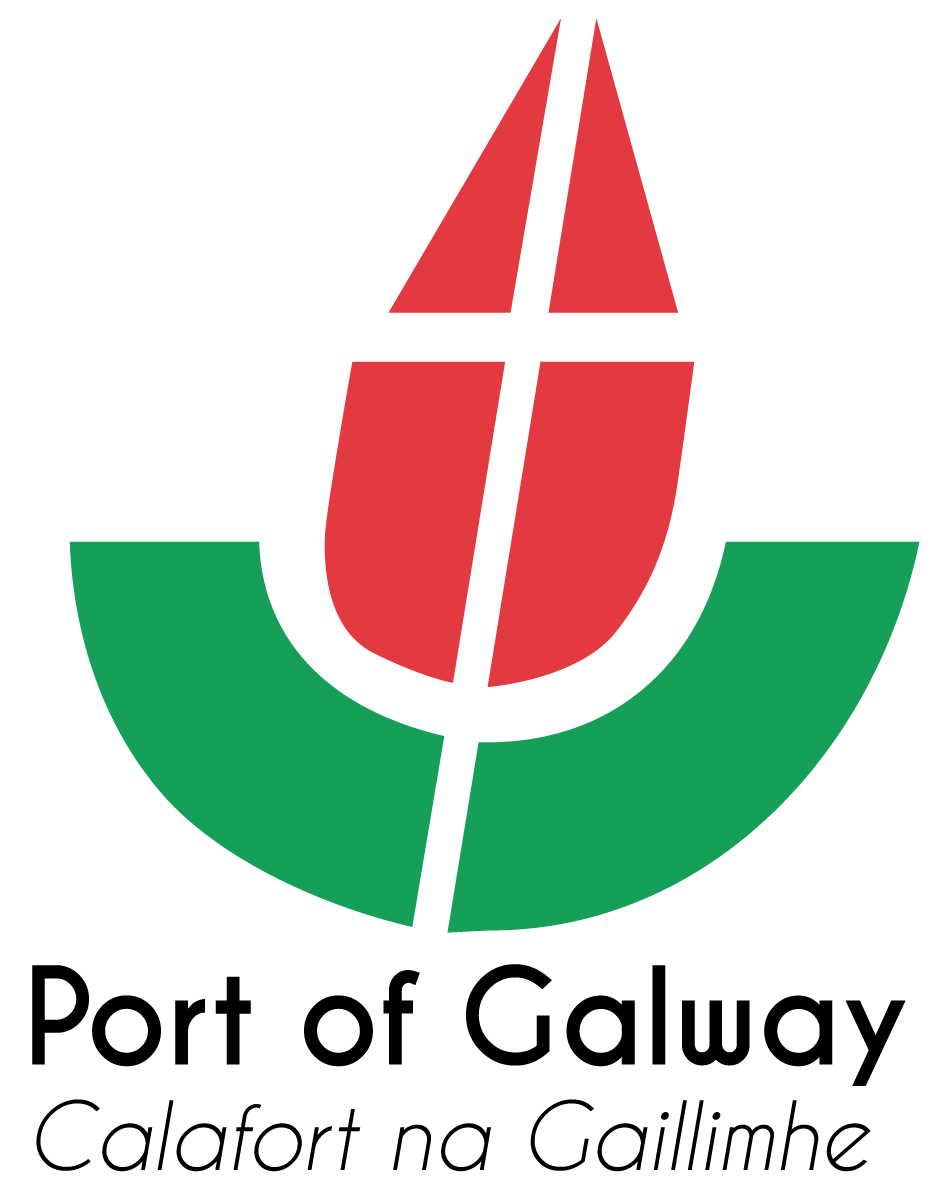 Illustrated Walking Tour Map of Galway created for Port of Galway to issue to cruise ship passengers as they arrive onshore. 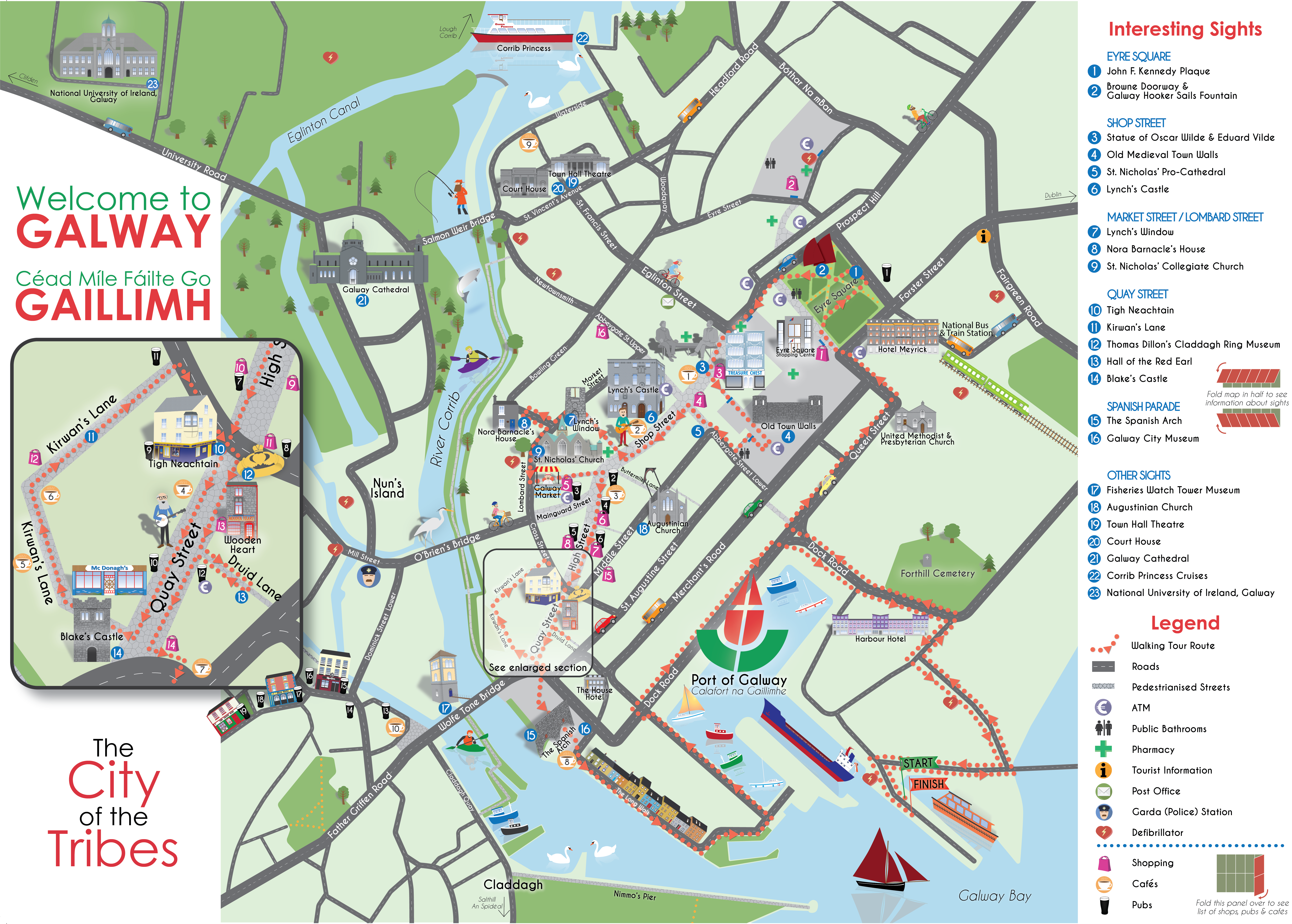 The Port of Galway welcomes over 14,000 cruise passengers and crew every year. As the passengers disembark their ship and come ashore, they are given different options for trips, tours and activities to occupy their time in Galway. The Harbour Master noticed that some passengers liked to take a “self-guided” tour of the city by foot and approached me to design a map that he could give the passengers to help them navigate around the city. From initial meetings, we decided to present a map of Galway, along with a “self-guided” walking tour route.

The project involved working closely with the Port to determine an understanding of the user-base, requirements and limitations.

Speaking with the Port gave me an understanding of the demographic of the users:

A large population of older passengers, some with mobility problems, who are a mix between those who wish to take organised tours and those who like to explore the sights of the city at their own pace.

Younger couples, often who want to explore the city by themselves.

It was decided early on, that the walking route would need to consider the physical limitations of Group A, but also present options further afield for Groups B and C. We also decided to include icons marking the location of defibrillators throughout the city, to add confidence and safety to the minds of all groups.

The map itself was designed to present more of Galway outside of the established walking tour route, for the user to explore at their own desire. 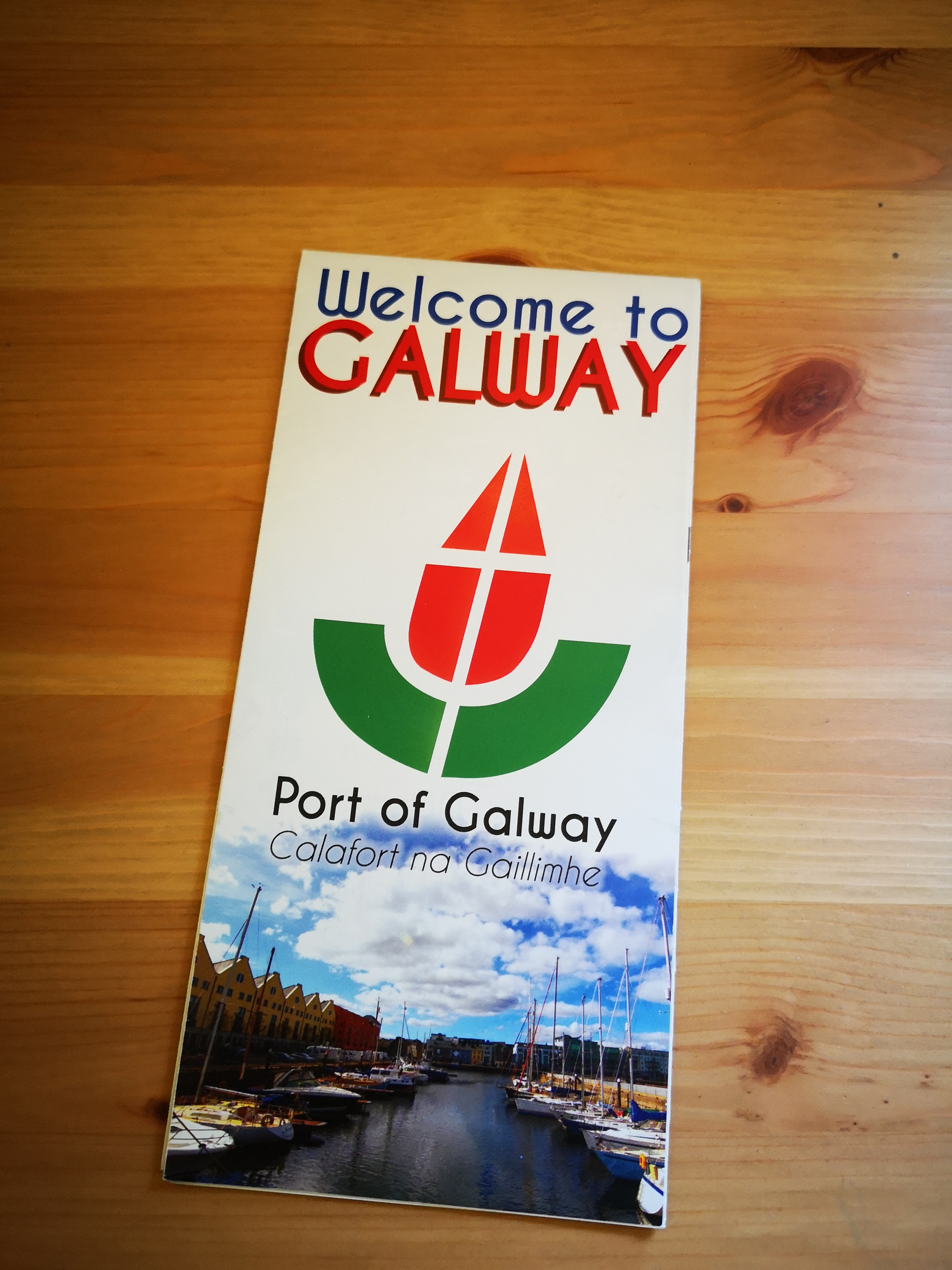 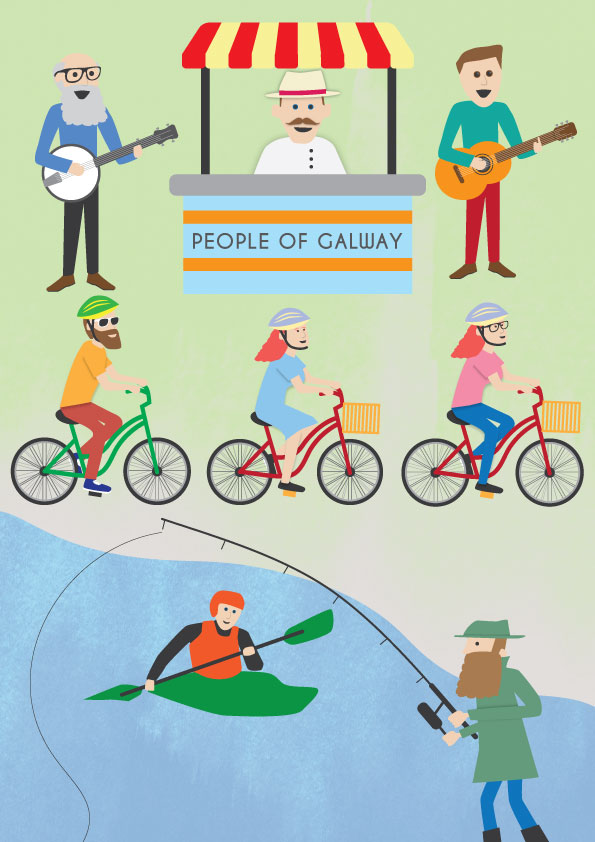 When you fold back one section of the map, you get the text explaining the history of that particular sight without losing your place in the map and unfolding again. I worked closely with the printers on this, and we determined the correct paper weight, water-proof materials and folding techniques that would work with both.

We tested the map out on some non-Galwegians and also with some users who don’t have English as their first language to test mainly for it’s convenience but also the understanding of the route direction, and finally for how interesting the route itself proved. 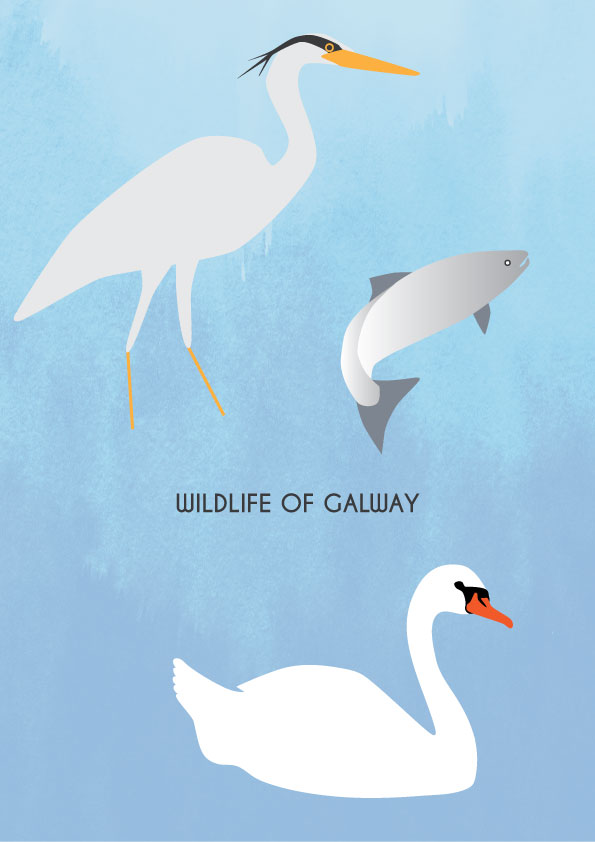 To make the map visually interesting to the passengers to peak their interest in Galway, and to leave a positive impression on them when they look back at their “souvenir” of their time here, I decided to create illustrations of iconic buildings, shops, pubs, wildlife and characters around Galway and use these as visual icons on the map. 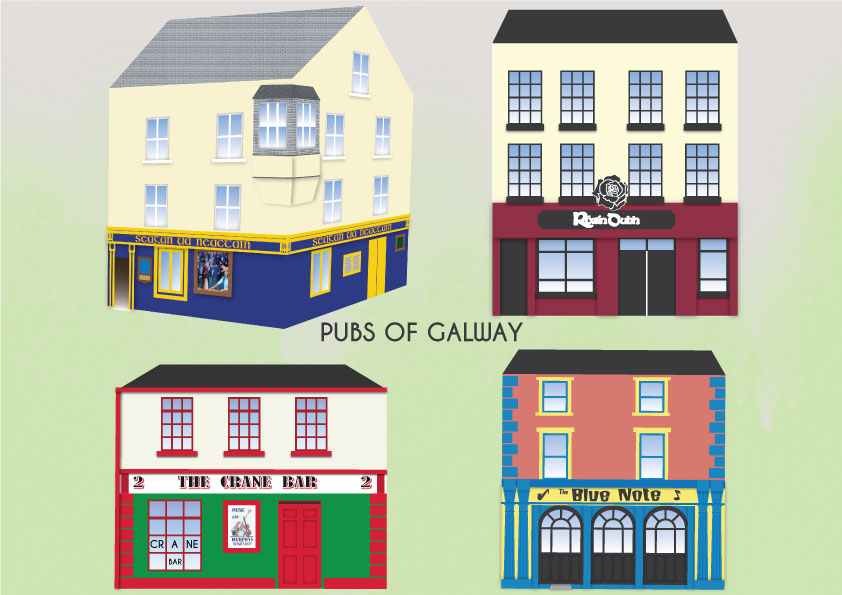 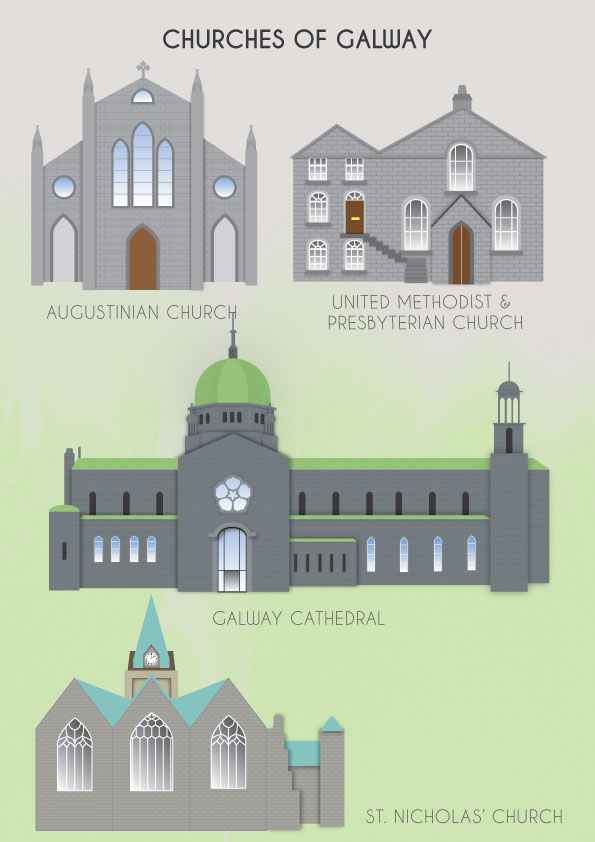 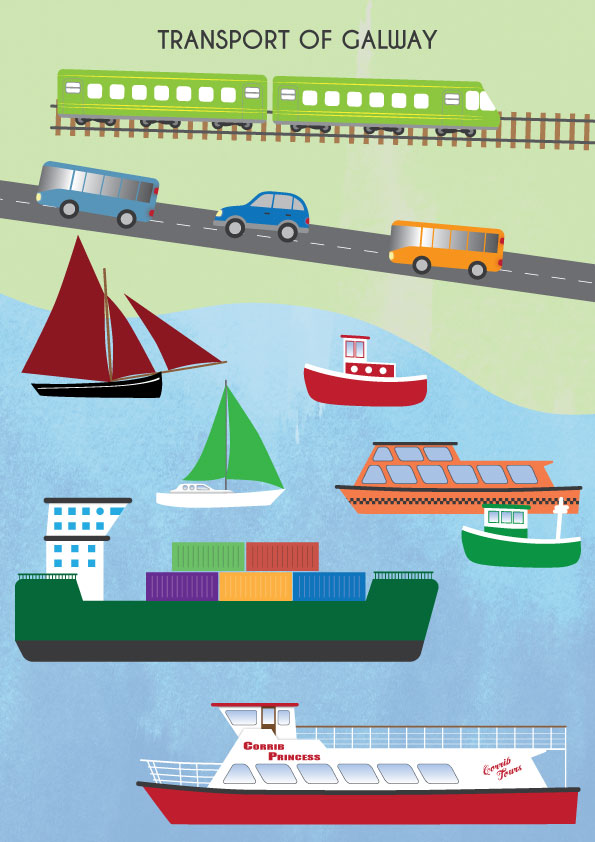 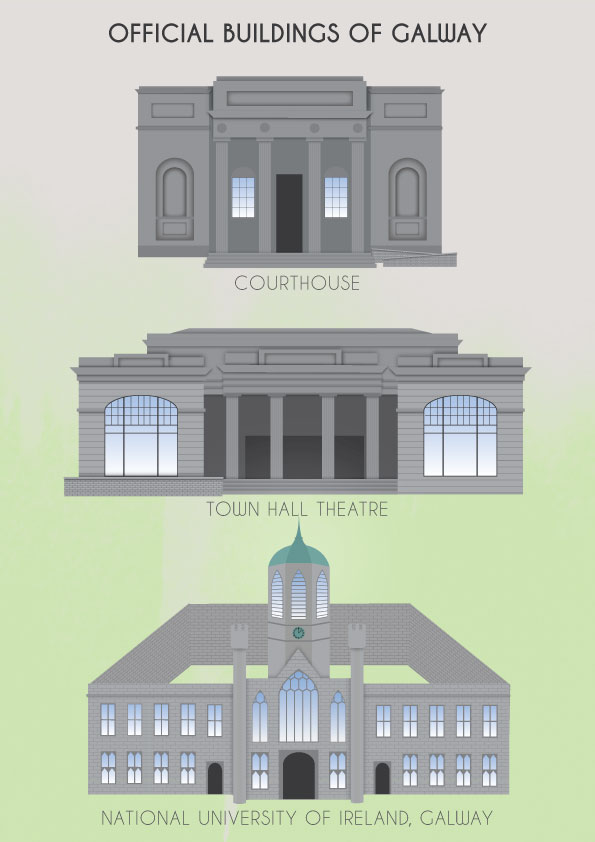 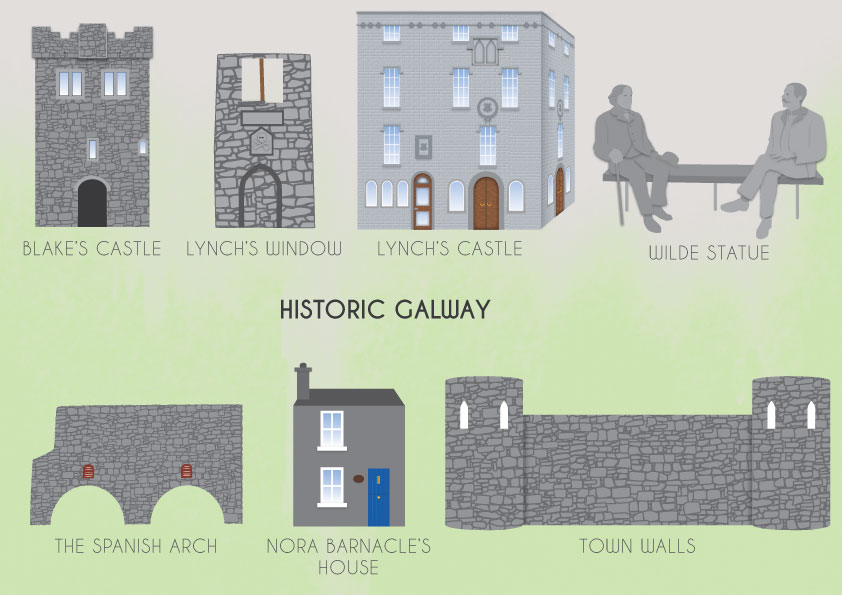 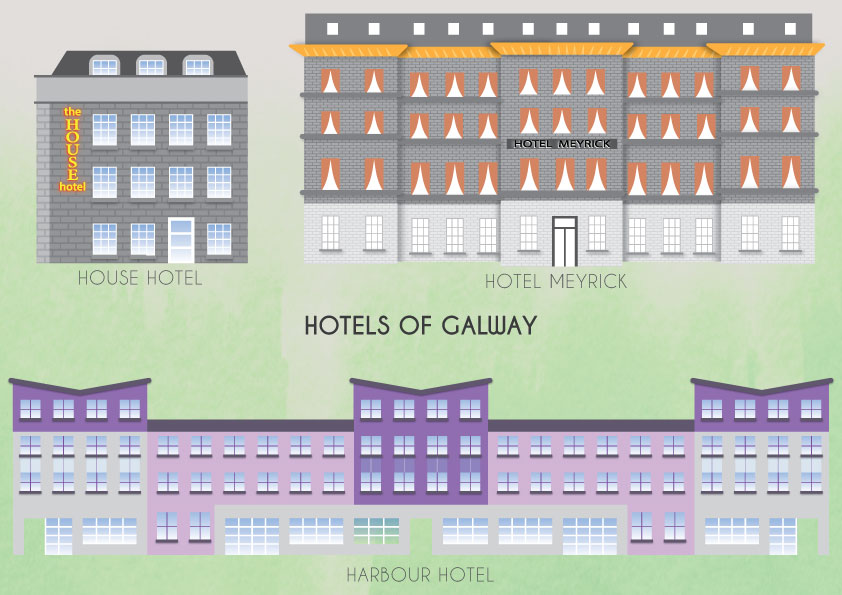 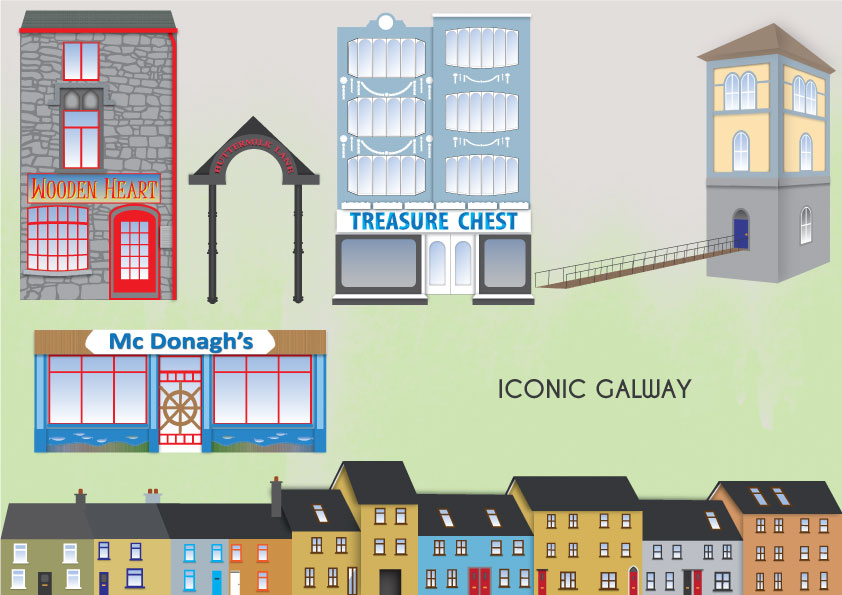 The map went down very well with cruise passengers. The map allowed for easy understanding of navigation around the city and the walking tour provided some structure for those who wished to see the suggested sights in the time available to them.

Town Crier, Liam Silke, who greets passengers on their initial arrival to the Port has called it “the best map” that he’s had his hands on.

Croí, the West of Ireland’s Heart and Stroke Charity, gave credit to the map for it’s inclusion of the locations of defibrillators around the city.

The map is still being used each year by an average of 15,000+ cruise passengers and crew, and is updated annually due to the natural changes in the city’s landscape.

The Walking Tour Map helps to keep cruise ship passengers to stay within the city when they disembark their cruise ship, rather than take day trips away from the city. It is estimated that each passenger spends an average of €70 per person on the Galway high street, meaning that the map plays a large role is helping bring in an additional €1.05 million of revenue for Galway Tourism.

Passengers per year (on average)

CRUISE SHIPS PER YEAR (ON AVERAGE)